This is I suppose an open letter to anyone in the public eye who has ever been called out for something.

It is hard being involved in social justice. Your heroes fail you all the fucking time, that is expected, we are all human beings, no one is perfect blablabla. The problem is they then act like its your fault when they fuck up. They tell you if you weren’t so sensitive you wouldn’t be hurt by this. They tell you their intention wasn’t to offend. They act like your hurt matters less than their freedom to do and say whatever the hell they want in the interests of art. or comedy. or entertainment. 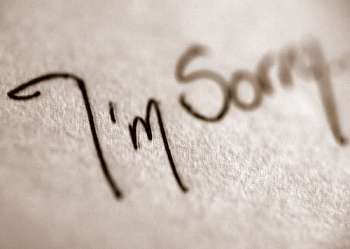 That is not acceptable to me. It is the first lesson you learn on the playground, if you hurt someone you apologise for it. Sincerely, without conditions, or justifications or acting like that hurt is irrelevant. If you hurt someone you apologise. If you can’t understand why they are hurt you take a moment to consider it from their point of view. If you still can’t understand why they are hurt you still apologise because hurting people is wrong. Even if you don’t intend to hurt people you can still hurt them, and your intention doesn’t make all that hurt magically go away. Just like when you actually crash your car into another, the damage is still done, despite your best intentions.

In a perfect world no one would fuck up ever. We don’t live in a perfect world, your fans want you to do better, that is why they point out when you have fucked up. A sincere apology will earn their respect. Not apologising doesn’t mean you are edgy or cool or badass, it just means that you genuinely don’t care about the people  you hurt. It means that you are insensitive to others and happy to collude in their oppression even when it has been pointed out to you that you are doing so. It means you don’t respect the basic humanity of the people who are telling you they have been hurt.

If you need an example of how to apologise thoughtfully and sincerely, with grace and poise I would like to direct you to the message of Jason Alexander (of seinfeld fame) quoted below in full. The context of this message is a joke that Mr. Alexander made regarding cricket being a “gay sport”.

“A message of amends.

Last week, I made an appearance on the Craig Ferguson show – a wonderfully unstructured, truly spontaneous conversation show. No matter what anecdotes I think will be discussed, I have yet to find that Craig and I ever touch those subjects. Rather we head off onto one unplanned, loony topic after another. It’s great fun trying to keep up with him and I enjoy Craig immensely.

During the last appearance, we somehow wandered onto the topic of offbeat sports and he suddenly mentioned something about soccer and cricket. Now, I am not a stand-up comic. Stand up comics have volumes of time-tested material for every and all occasions. I, unfortunately, do not. However, I’ve done a far amount of public speaking and emceeing over the years so I do have a scattered bit, here and there.

Years ago, I was hosting comics in a touring show in Australia and one of the bits I did was talking about their sports versus American sports. I joked about how their rugby football made our football pale by comparison because it is a brutal, no holds barred sport played virtually without any pads, helmets or protection. And then I followed that with a bit about how, by comparison, their other big sport of cricket seemed so delicate and I used the phrase, “ a bit gay”. Well, it was all a laugh in Australia where it was seen as a joke about how little I understood cricket, which in fact is a very, very athletic sport. The routine was received well but, seeing as their isn’t much talk of cricket here in America, it hasn’t come up in years.

Until last week. When Craig mentioned cricket I thought, “oh, goody – I have a comic bit about cricket I can do. Won’t that be entertaining?”. And so I did a chunk of this old routine and again referred to cricket as kind of “gay” – talking about the all white uniforms that never seem to get soiled; the break they take for tea time with a formal tea cart rolled onto the field, etc. I also did an exaggerated demonstration of the rather unusual way they pitch the cricket ball which is very dance-like with a rather unusual and exaggerated arm gesture. Again, the routine seemed to play very well and I thought it had been a good appearance.

Shortly after that however, a few of my Twitter followers made me aware that they were both gay and offended by the joke. And truthfully, I could not understand why. I do know that humor always points to the peccadillos or absurdities or glaring generalities of some kind of group or another – short, fat, bald, blonde, ethnic, smart, dumb, rich, poor, etc. It is hard to tell any kind of joke that couldn’t be seen as offensive to someone. But I truly did not understand why a gay person would be particularly offended by this routine.

However, troubled by the reaction of some, I asked a few of my gay friends about it. And at first, even they couldn’t quite find the offense in the bit. But as we explored it, we began to realize what was implied under the humor. I was basing my use of the word “gay” on the silly generalization that real men don’t do gentile, refined things and that my portrayal of the cricket pitch was pointedly effeminate , thereby suggesting that effeminate and gay were synonymous.

But what we really got down to is quite serious. It is not that we can’t laugh at and with each other. It is not a question of oversensitivity. The problem is that today, as I write this, young men and women whose behaviors, choices or attitudes are not deemed “man enough” or “normal” are being subjected to all kinds of abuse from verbal to physical to societal. They are being demeaned and threatened because they don’t fit the group’s idea of what a “real man” or a “real woman” are supposed to look like, act like and feel like.

For these people, my building a joke upon the premise I did added to the pejorative stereotype that they are forced to deal with everyday. It is at the very heart of this whole ugly world of bullying that has been getting rightful and overdue attention in the media. And with my well-intentioned comedy bit, I played right into those hurtful assumptions and diminishments.

And the worst part is – I should know better. My daily life is filled with gay men and women, both socially and professionally. I am profoundly aware of the challenges these friends of mine face and I have openly advocated on their behalf. Plus, in my own small way, I have lived some of their experience. Growing up in the ‘70’s in a town that revered it’s school sports and athletes, I was quite the outsider listening to my musical theater albums, studying voice and dance and spending all my free time on the stage. Many of the same taunts and jeers and attitudes leveled at young gay men and women were thrown at me and on occasion I too was met with violence or the threat of violence.

So one might think that all these years later I might be able to intuit that my little cricket routine could make some person who has already been made to feel alien and outcast feel even worse or add to the conditions that create their alienation. But in this instance, I did not make the connection. I didn’t get it.

So, I would like to say – I now get it. And to the extent that these jokes made anyone feel even more isolated or misunderstood or just plain hurt – please know that was not my intention, at all or ever. I hope we will someday live in a society where we are so accepting of each other that we can all laugh at jokes like these and know that there is no malice or diminishment intended.

But we are not there yet.

So, I can only apologize and I do. In comedy, timing is everything. And when a group of people are still fighting so hard for understanding, acceptance, dignity and essential rights – the time for some kinds of laughs has not yet come. I hope my realization brings some comfort.

2 thoughts on “All Apologies”